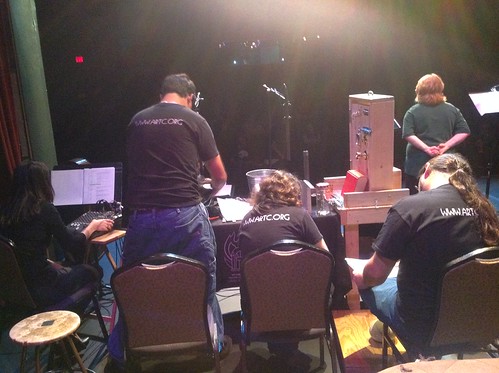 We ended up performing The War of the Worlds: The Untold Story twice in 2013. The debut performance was, of course, Dragon Con, which is where this podcast performance came from.

But the second time was at the Marcus Jewish Community Center, and it was a blast. We cooked up a bit of new Foley since we weren’t going to have to work around convention crowds, and the MJCC sports a top-notch theatre space. We hope to get back there again some time!

In this photo, you can see Foley mixer Larrie Fisher (left), and Foley artists Anthony Fuller, Beth Braunstein, and Jason Boldt (left to right), plus cast member Clair W. Kiernan (downstage). Society has somehow come to the conclusion that the actors are the ones in a performance to be celebrated, but the fact is that without Foley, audio drama isn’t quite as magical and we spend a ton of time developing ours to be as good as we possibly can.